Story and Photos by Jason Hummel

There’s a feeling upon returning to the Olympics that I can’t escape. I think everyone feels it whenever they cross paths in places where great memories, adventures, and friendships were forged.

While crossing paths is a fantastic byproduct, it wasn’t my sole impetus for returning to the Olympics. Instead, in 2016, after Tim Black and I completed an epic north to south ski-crossing of the Olympic Mountains (See: The Olympic Traverse), we had missed four glaciers for my Washington Glacier Ski Project. For that reason, I had to return to Mt. Skokomish and its secluded northern glacier.

On April 16th, along with my friend Jake Chartier, we set off from the Lake of the Angels trailhead with two days of supplies and a weeks worth of pent-up energies. Too often I forget, but am always reminded that there’s nothing like exercise to get you centered. A dumb mind is a happy mind and it’s hard to care about shit when you’re tired as shit.

It is in the forest above the valley and below the glaciers, in those between places, that I fall in love with the Olympic Mountains all over again.

The trail to Lake of the Angels has one spicy section where ropes used to hang to help with purchase. We didn’t find them on our trip, but nonetheless, the scramble offers plenty of handholds. Had we more snow,  the way would’ve been challenging, but with several feet I’m sure alternate routes would become apparent to the climber’s right prior to the headwall.

After we surmounted the cliffs, snow presented itself with sufficient depth for skinning. Perfect. Shoes were stashed under big chunks of bark to protect them from rain. Skis were put on. All was happy in Mountainville, even if the weather was beginning to deteriorate and little buckets of watery-joy were being dashed upon our heads like water balloons.

Under this dreary umbrella, we arrived at Lake of the Angels. Such a lofty name didn’t befit the view, but I expected it wouldn’t be as openly impressive without an expanse of flowers, heather and cobalt waters greeting us. Snow has its own appeal. A fresh paint on an old house kind of feel that I connect with. A sense of knowing you are alone, because any wanderer would’ve left snowy tracks in their wake. A secureness that my animal brain finds comfort in.

From the lake, a game of connect the dots on the GPS, led us between cliffs to a 5800 foot pass. Any view was imagined due to a blanket of fog that refused to dissipate. We busied ourselves by building a snow wall around camp, for once in no hurry. The climb had been easy and time was ours to do nothing with, except apparently, to dig. That excess energy still needed to be further burned. Kids have all the energy in the world, and crawl over everything. Mountain men like me, are simply kids who climb mountains instead of parents.

Twelve hours of sleep later, the sound of snow dancing on the tent had died. I thought, “Was it sunny?” There was only one way to find out. An open vent and white on white told me we were still in a whiteout. Glorious. Did I say snow is like new paint on a house? Well, I like blue trim, too.

There was another 5800 foot notch I was hoping to cross. With nothing else to do but to go wander in the fog, we set off toward the first challenge – a cornice. A handy trick comes in the form of a snow flick from your ski pole baskets. If it lands ahead of you, there’s not a big drop from one feature or another. If you don’t see the snow land, then you’ve averted disaster. Back up and repeat snow flicking or proceed with caution? I chose the latter, because I like dropping six foot drops blind. I landed hard, but that was to be expected. Once I was down below, I saw definition and realized that everywhere was good to go besides where I went. My life in a nutshell. Good thing I like jumping cornices!

We floundered our way to the key notch and nosed our way over, then 500 feet down to a fog-encompassed northern basin, the one I’d been hoping to get to. Within lies the Skokomish Glacier. What remained of her underlying ice were seen in the recently abandoned glacier moraines that rose around us.

After we transitioned, slopes beyond the moraines grew out of the haze, ghostly vestiges rising as if from nothing at all.

Higher still, very near the top, solar radiation warmed our faces and was a telltale sign that there’d be a break in the fog soon. Only as we crested the summit ridge were we allowed to see beyond our own two feet. The world above feeling you get when the clouds spill off your toes and spin away from ridge lines and cliff faces into the air below, always pulls a yell from me. It’s a universal constant, I think – that thrill of unveiling – and it’s an uncommonly powerful emotional release when it’s the world that’s being revealed!

A narrow summit ridge brought us to the top where we paused for a few minutes. Somehow I picked up cell service and left a few messages to 9-5ers who probably didn’t need me to remind them of what they’re missing out on. That didn’t stop me from piercing their work-bubbles and hopefully bringing a smile to their face, at least after the exclamations of “God damnit, Hummel!”

The descent was on dense snow that quickly took us back the way we’d come. The pull of gravity kept us on the downward slide even after the springtime mank slowed our skis to a crawl. I transitioned at 4900 feet, above a river/couloir constriction that’d been stuffed with wet slide debris.

Before leaving the basin, the light warped from slope to slope. The convoluted terrain was finally shown to me in this most satisfying way. Leaving is never easy nor is the going, but the getting there makes it all worth it.

Back at the notch, we climbed up on the ridge to a higher point, so we could descend to camp. Another break in the clouds came but was only minutes long. With incoming weather on the way, we rushed to leave. Some kicks to our snow walls and that night’s new snowfall and it’d be as if we’d never come.

Our return was a flurry of snow descents followed by hot, skinless side stepping over flats. When we arrived back to our shoes, sequestered our skis to packs and began down the trail, it was like resort skiing. Tired legs are pushed to their limit, but you keep on keeping on.  “The down can’t be tiring, can it?” Yes, we certainly know that it can be.

Back at the car, I had no clean socks or even a beer, but neither were needed. The Olympics had provided more memories to remember, more paths to cross and more adventures to further tie my heart to these great Olympic Mountains. 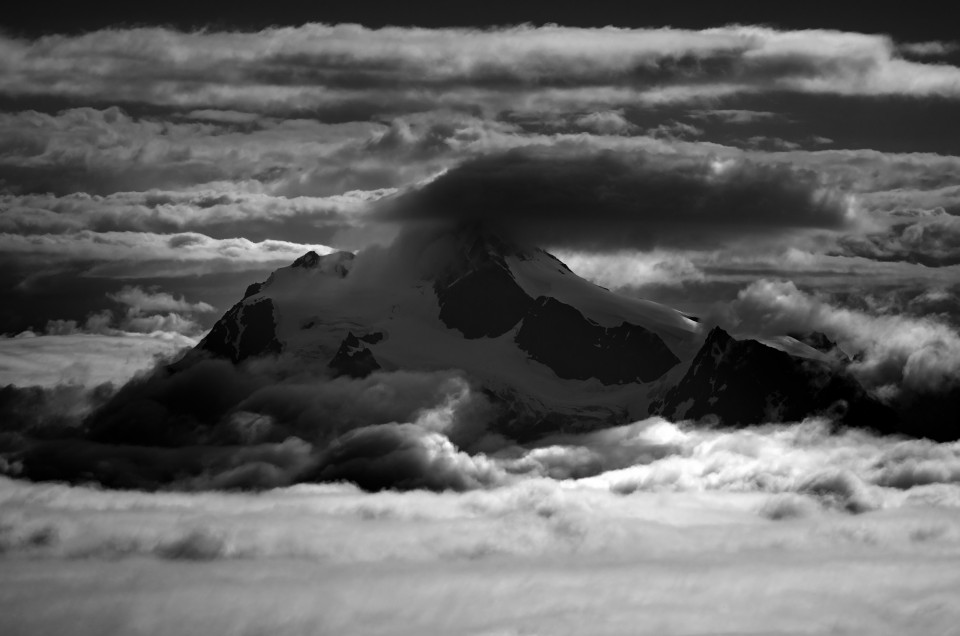 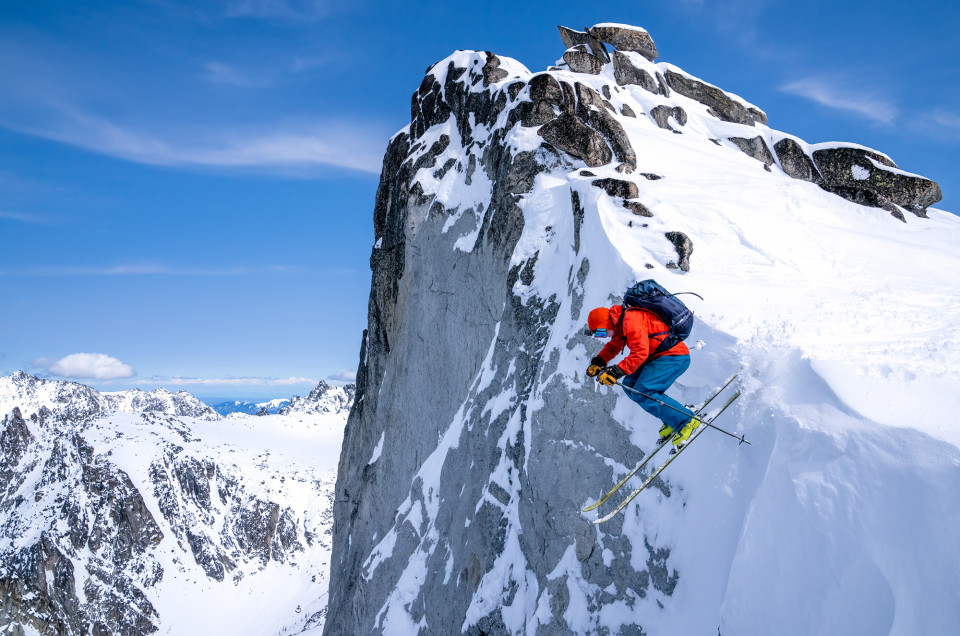 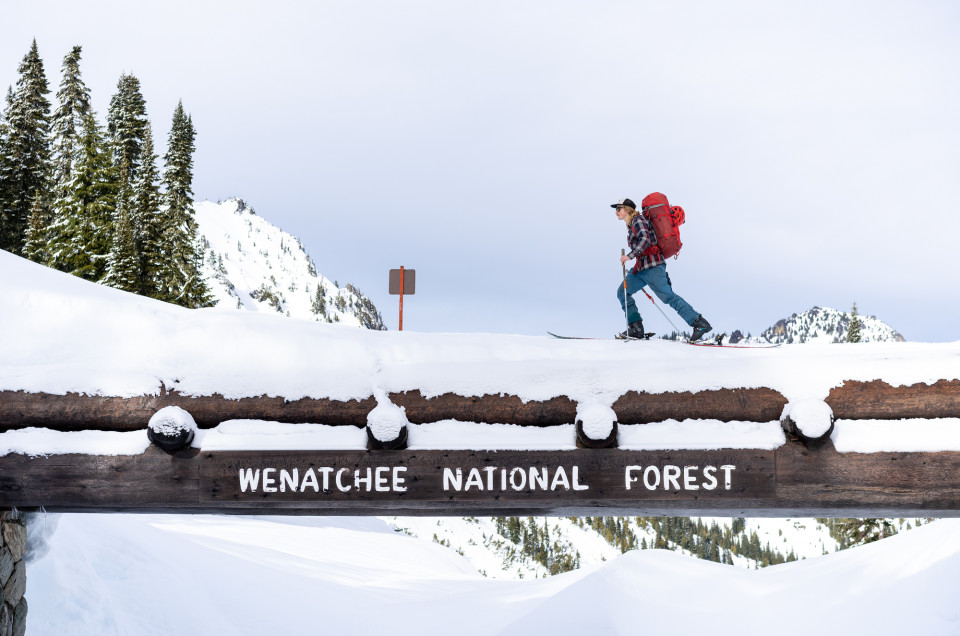